Some months ago, a fellow garlic lover from Ohio asked if anyone had tried the Garlic Expressions salad dressing .
I got this email from Ken Smith:
"Yes, I have tried garlic expressions salad dressing and it is absolutely my favorite. I buy it by the case and give it away to friends. My only complaint is I can't buy it retail anywhere in the Spokane, WA area. I used to be able to get it at our local Safeway and Fred Myers but not any more. The only way for me to buy it is through email order. I use it for everything from salads to fish, chicken and vegetables. I have tried emailing the company to find retail outlets here but no luck. Any ideas?"

I guess what you could do is order by mail and have itshipped to Washington. That's what we do in Canada sometimes with articles from the States that are not available here. Any other ideas?
Posted by Maria at 15:30 No comments:


Crush anywhere from 1 bud to 2 buds garlic (go big or go home!) and put it in the bottle
Fill the jar 1/3 full with olive oil
Add lemon juice until the jar is 2/3 full
Add parmesan cheese until there is a little bit of room left
(The recipe is equal parts of oil, lemon juice, and parmesan)
Add scant 1/4 cup Lea & Perrins worchestishire sauce
Add 1 tsp salt
Add fresh grated pepper - a scant tsp


Shake the heck out of the jar, and then taste. Adjust seasonings. We never measure when we make this, we just adjust it until it tastes right.


Enjoy! (It gets stinkier the longer it's in the fridge!)


Sounds delicious!
Posted by Maria at 17:43 No comments:

Papardelle with garlic and bacon sauce

I took this picture at Terroni, on Victoria St. in Toronto. Amazing Italian restaurant, I felt like I was in Florence or something. And delicious food. (You can eve see the garlic cloves right there!) 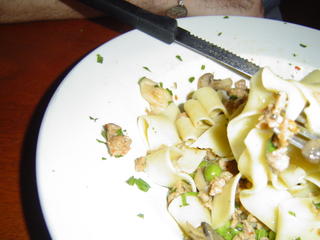 (Sorry about the crappy post... and picture. My computer is still broken at home, it will be about 2 more weeks till I get the part and have it fixed. Meanwhile I don't have photoshop here to fix the pic. But doesn't it look delicious? It was!)
Posted by Maria at 10:10 No comments:

My computer at home is broken. I won't be able to post any recipes for a couple of days. But I have a surprise for the end of the summer: the recipe for GAZPACHO!! (with pictures). Lots and lots of garlic, delicious! I'll post it soon.
Posted by Maria at 11:06 No comments:

Cut tomatoes in half and squeeze out the seeds. Chop tomatoes into small dice; place in bowl. Add onion, garlic, basil or pesto, vinegar or lemon juice, chili paste, olives, salt & pepper to taste. Let stand for about an hour. Drain liquid if desired. Roll out pizza dough into a thin rounded rectangle. Bake pizza dough at 400 degrees for 20 minutes, until lightly browned. Spread with tomato mixture. Top with the Parmesan. Enjoy. (As for the garlic, go big or go home!!)

(an Original recipe by Lorence Sing - http://lorenceskitchen.blogspot.com/)
Ingredients:
1 can Cannellini beans, drained and rinsed
1/2 teaspoon dried Oregano or 1 teaspoon fresh Minced Oregano
2 or 3 cloves of Garlic, minced
1/2 cup of Chicken Broth
1 Tablespoons of Olive Oil
Directions:
1) Put all ingredients into a medium saucepan and simmer, uncovered, for 5 to 10minutes
2) Cover and simmer for about 15 minutes more.
3) Serve immediately. If serving with the Garli-Lemon buttered Shrimp recipe above, drizzle a bit of the Shrimp's sauce over the beans, too.

Pan-Seared Shrimp (from Cooks Illistrated)
The cooking times below are for 21/25 shrimp (that is, the size of the shrimp is such that there are 21 to 25 in 1 pound). If 21/25 shrimp are not available, adjust cooking times slightly. Either a nonstick or traditional skillet will work for this recipe, but a nonstick will simplify cleanup.

Directions:
1) Heat 1 tablespoon oil in 12-inch skillet over high heat until smoking.
2) Meanwhile, toss shrimp, salt, pepper, and sugar in medium bowl.
3) Add half of shrimp to pan in single layer and cook until spotty brown and edges turn pink, about 1 minute.
4) Remove pan from heat; using tongs, flip each shrimp and let stand until all but very center is opaque, about 30 seconds.
5) Transfer shrimp to large plate.
6) Repeat with remaining tablespoon oil and shrimp;
7) After second batch has stood off heat, return first batch to skillet and toss to combine.
8) Cover skillet and let stand until shrimp are cooked through, 1 to 2 minutes.
9) Serve immediately.

Recipe taken from:
Rhosgobel: Radagast's home (and there are lots of recipes that can be accessed from this page also link)

To make this creamed spinach you cook up a white sauce in one pot, some spinach and onions in another pot, and then combine the two at the end. Making the white sauce and cooking the spinach can easily be done in parallel, and all told this recipe takes less than half an hour to make.

To make the white sauce:
1. Melt 4 tablespoons butter in a small non-stick pot over medium-high heat.
2. Add the garlic, and cook, stirring, until the garlic begins to brown (~5 minutes, though it depends on your stove's heat and the size of the garlic bits).
3. Reduce the heat to medium, add the flour and salt, and, stirring constantly, cook until the flour begins to brown and starts to smell nutty/toasty (we don't time this process, but probably around 3 minutes).
4. Reduce the heat to medium low, and add the warmed milk to the flour mixture in two or three batches, whisking constantly until smooth. Do not add the milk all at once. The sauce will be very thick.

To cook the spinach and onions:
1. If you desire, defrost the spinach; we do this by putting the spinach in a large bowl, adding a few tablespoons of water, and then microwaving it until it's no longer icy (but still not cooked).
2. Melt two tablespoons of butter in a large non-stick pot over medium-high heat.
3. Add the onions and cook, stirring frequently, until the onions turn clear and start to brown (at least five minutes, though again it will vary).
4. Add the spinach, water, and one teaspoon of salt, and cook, covered and stirring occasionally, until the spinach is done. If you've defrosted the spinach this will be about five minutes, if you're using frozen spinach, this will take longer.

Assembling the dish:
1. Add the white sauce and sour cream to the cooked spinach, and stir to mix thoroughly.

If you don't really like garlic, I might suggest reducing the amount of garlic a bit. The recipe can be made quite successfully without garlic, but then it wouldn't be "garlicy creamed spinach," now would it?

We based this recipe on a creamed spinach recipe we found online years ago (I believe it was trying to mimic Boston Market's creamed spinach), but we have long since lost the link.
Posted by Maria at 09:56 No comments:

I promised Sugarmama that I would post my recipe for authentic chunky "fire roasted" salsa for The Salsa Review.
Ingredients:
One white onion
8 cloves of garlic
8 or 9 green chilies (I used a kind of chili simiar to serrano chili, I found them at the St. Lawrence Market, though I think they might have been Asian. They were skinny though, that's what's important, better than jalapenos).
3 tomatoes
Salt
Half a teaspoon Mazola corn oil
Secret ingredient (to be revealed later on the post)

Heat the Mazola corn oil and fry the chilies. Add salt to taste. They will be ready when the seeds start popping and they are brown. This is the "fire roasting".

Add the onion and the garlic. Add a little bit more salt and stir fry it with the chilies for about 10 minutes. The onion will caramelize. This will give the onion and garlic a nice hot flavour from the chilies. 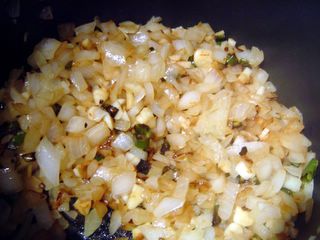 Add the chopped tomato and the secret ingredient. 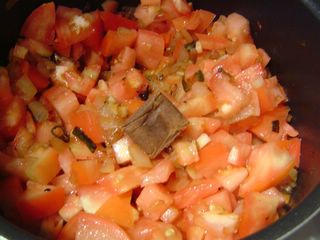 It is a cube of Knorr vegetable bouillon. 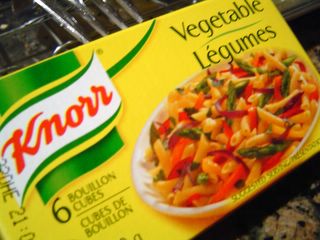 Make sure the bouillon is dissolved with the heat. Cook for another 20 to 25 minutes letting the tomato cook thoroughly. You can add half a cup of water if desired, just make sure it's not too watery. The chopped (not pureed) ingredients will give the salsa its chunkiness.

Enjoy your salsa, it is delicious! 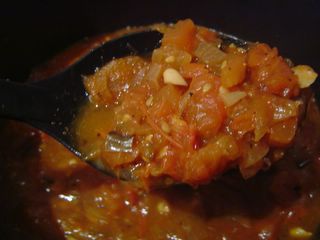