I made garlic bread last week, and the garlic turned out green! I made it with olive oil, not butter, because of my allergies, but apparently it does it sometimes also with butter. Ah well, I guess we know it really does happened, as stated in this post: Green Garlic.
Posted by Maria at 10:24 2 comments:

How to make a creamy soup when no milk or cream is to be added? I found a few recipes but they all said to mix everything with the blender, but then the leeks would not be visible. I wanted the soup to be creamy but the leeks to be recognizable within the soup. To make this recipes you need to prepare the leeks and the potatoes in separate pots, this will allow to puree the potatoes and leave the chopped leeks to add chunky texture to the soup. 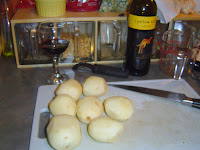 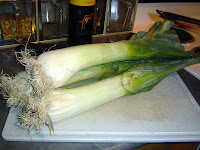 I used:
4 cups potatoes, peeled and chopped
2 large leeks, chopped (there are 3 in the picture but I only used 2)
3 cloves of garlic, chopped
2 tablespoons olive oil
4 cups vegetable broth or water (or more depending on how thick it is and/or how liquid you like it
1 teaspoon curry powder
1 teaspoon chopped ginger
salt and pepper to taste 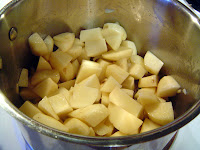 In a separate pot, sautee the leeks in the olive oil for 2 minutes. 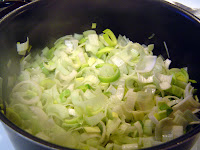 When the potatoes are cooked in the broth, puree with the hand blender, the texture will be that of a vichyssoise. Add the leeks and simmer for 2 minutes for flavour. 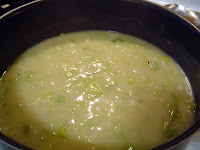 Add the chopped ginger and the curry powder to the soup. This will make the soup look a bit yellow, not the usual white, but will give it a distinctive flavour of deliciousness. Season with salt and pepper to taste. 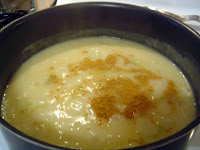 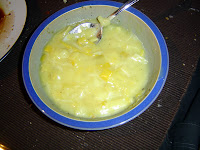