I received the following email from Javier:

I have tasted a Puttanesca spaghetti at a restaurant that has become my favorite. The sauce has a very strong garlic flavor in it.
I have prepared different dishes with "AMORE" garlic paste, and like it a lot, I consider that it imparts a different garlic flavor to foods than minced garlic, and both complement each other very well.
But returning to that puttanesca sauce, this time I purchased one litter of the product, which was given to me still hot. When I opened the container, I could find one chunck of tomato that tasted very strongly to garlic. I'm sure it's some kind of garlic marinating that is done to the tomatoes, perhaps for several weeks before preparing the sauce. It was the tomatoes that had the strong garlic flavor which I'm looking for, and not the rest of the liquids in the sauce.
Perhaps you have an idea as to how to marinate the tomatoes.
Javier

I know that if you fry garlic in olive oil, being really careful not to burn them, you get garlic flavoured olive oil that is great to use as seafood salad dressing. I wonder if maybe sauteeing the tomatoes in olive oil and lots of garlic would make a difference.
Does anyone have any suggestions??
Posted by Maria at 13:02 No comments: Links to this post 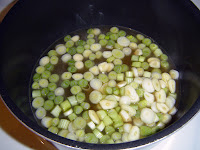 Chop the green onions and garlic, place them in a pot and pour the vegetable buillon over them. Boil for about 5 minutes. Incorporate the cooked green beans and boil until almost all of the liquid had been reduced. 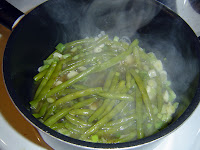 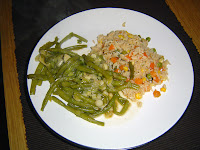 Posted by Maria at 21:08 No comments: Links to this post

This recipe was sent by Lorence, I shamefully stole all his pictures. You can see the original on this link. Also he's got lots of recipes on his website, be sure not to miss it! 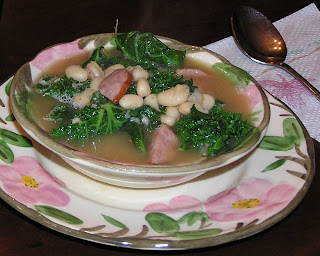 This is another of our cool weather favourites. The textures, aromas and tastes in this dish all combine to create a refreshing melange that's warming and incredibly flavourful. And it was a great way to use kale, which around here, is usually inexpensive and plentiful. I saw this recipe in Redbook Magazine's February 2000 issue. I didn't really notice the recipe at first & it wasn't really the kind of recipe I would normally have paid much attention to, but the photo...Oh the photo looked delicious. I saw that picture and I wanted a bowl of whatever it was! A few weeks later, I made the recipe and we've been hooked since. I wish I still had the original magazine so I could post that photo, but all I have left is a photocopy. I'll try to take a shot next time I make it (probably in a couple of weeks).

The remarkable thing with this recipe is that I don't change a thing (Well, ok, sometimes I use a bit more smoked sausage...). The recipe calls for 3 cloves of garlic. Finally! Why, oh, why would a recipe call for only 1 clove of garlic?!? What good is that? I love garlic, so I use a lot of it, and this recipe calls it right - 3 cloves. 3 LARGE cloves. Yum. 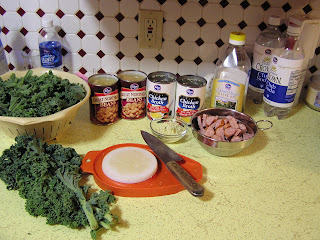 Directions:
1. Brown the sausage in a large saucepan over medium-high heat. I brown it until the bottom of the pan starts to turn brown with the cooked fat. 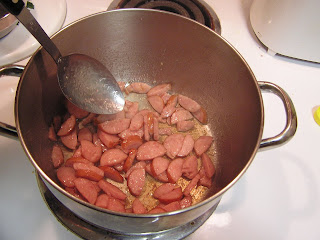 2. Remove the sausage from the pan to a bowl.
3. Add the oil to the pan and add the garlic. Cook the garlic for about 30 seconds. Don't let it brown! (it will turn bitter if it browns!) 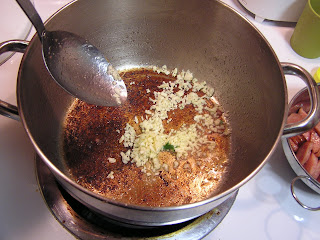 4. Add some broth to the pan to deglaze it, scraping up as much of the browned bottom of the pan as possible, adding more broth as needed. Then add the rest of the broth. 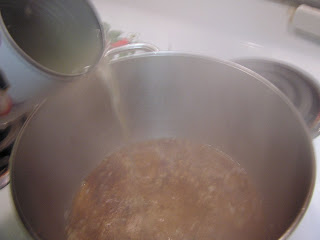 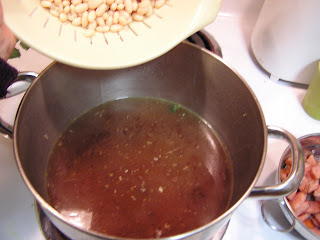 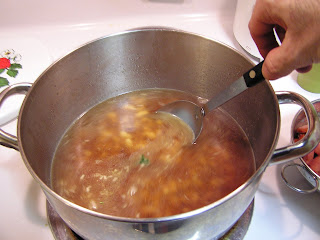 7. Simmer for about 5 minutes.
8. Remove 1 cup of soup, including some beans, to a blender and puree the mixture until smooth. 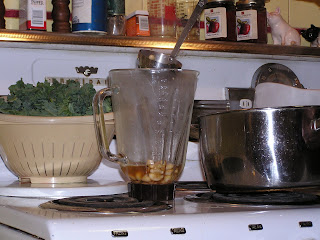 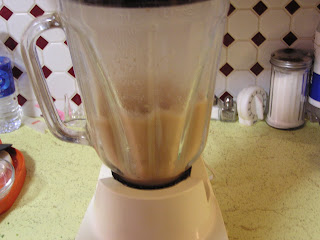 9. Stir the puree back into the soup. 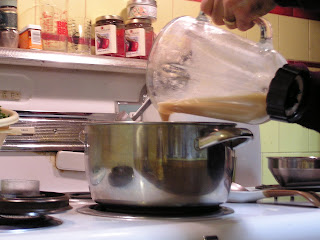 10. Add the sausage back into the soup.
11. Add the kale to the soup and simmer util the kale is just tender, then serve. 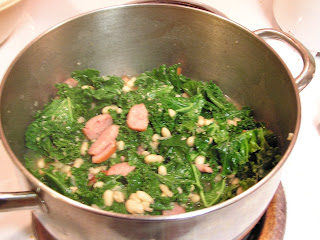 This makes 6 1/2 cups, and goes great with a nice crusty bread.

Enjoy,
Lorence
Posted by Maria at 13:08 No comments: Links to this post

This recipe was posted on Lorence's Kitchen (link to the recipe). Take a look at his blog, he has some delicious recipes, not all featuring garlic but they are just so good! 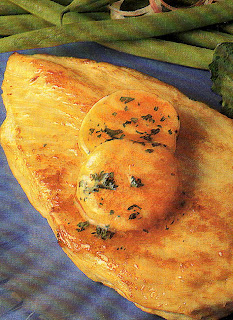 (The picture was also shamefully stolen from his blog)
I knew I was going to have to make something quick last night since we were heading to my son's school Christmas show, so I dug this recipe out a couple of nights ago for the small bit of night-before prep it requires. That prep is simply making a sweetly pungent tomato butter that tops a simple sauteed chicken breast. The dish itself was a fast cook, since all that's done is just pan sauteeing the chicken until done. The seasoned flour on the chicken makes for a nice thin yet crispy crust. The R.O.I. on that little prep was huge!
Chicken Breasts with Tomato Butter

The Ingredients
4 Table spoons of butter at room temperature
1/4 teaspoon of finely minced garlic1 teaspoon of tomato paste1 teaspoon of chopped fresh parsley
1/4 cup of flourSalt and pepper
4 boneless, skinless thicken breasts(try not to get the monstrously large., hormone laden type - they're too thick to be pan sautéed.
2 Tablespoons of olive oil

The Directions:
Combine 3 Tablespoons of the butter with the garlic, tomato paste and parsley.
Scrape the mixture onto a piece of plastic wrap and use the wrap to help form the butter into a cylinder. Wrap the cylinder tightly and chill.
Combine flour, ½ tsp. salt and 1/4 tsp. pepper.Dredge the chicken in the flour mixture.
In a large frying pan, melt remaining 1 Tablespoon of butter in the olive oil over medium-high heat.Add the chicken and reduce the heat to medium.
Cook, turning once, until chicken is just done, about 10 minutes.Serve immediately, topping the hot chicken with slices of the butter.

Some variations to explore:
For the butter:
Use Shallots instead of garlic
Use sun-dried tomoato instead of tomato paste
Add chopped black olives to the butter
Substitute fresh basil for the parsley

This recipe came from "First for Women" magazine, sometime in the early-mid1990's. I have several recipes from this magazine but I can't find a single one online. I'll post a few more as I make them.
Enjoy!

Posted by Maria at 12:42 No comments: Links to this post